This week, Crary, Clark, Domanico, & Chuang, P.S. presented Spokane student Andrew Walker with a Certificate of Scholarship. Andrew wrote a very interesting essay for the CCD Law Spokane Community Scholarship. This year’s essay entries answered the question “How you would make the streets of Spokane safer?” There were many great entries and we selected Andrew’s. He will be attending Hillsdale College. Great job Andrew! You can read his answer below. 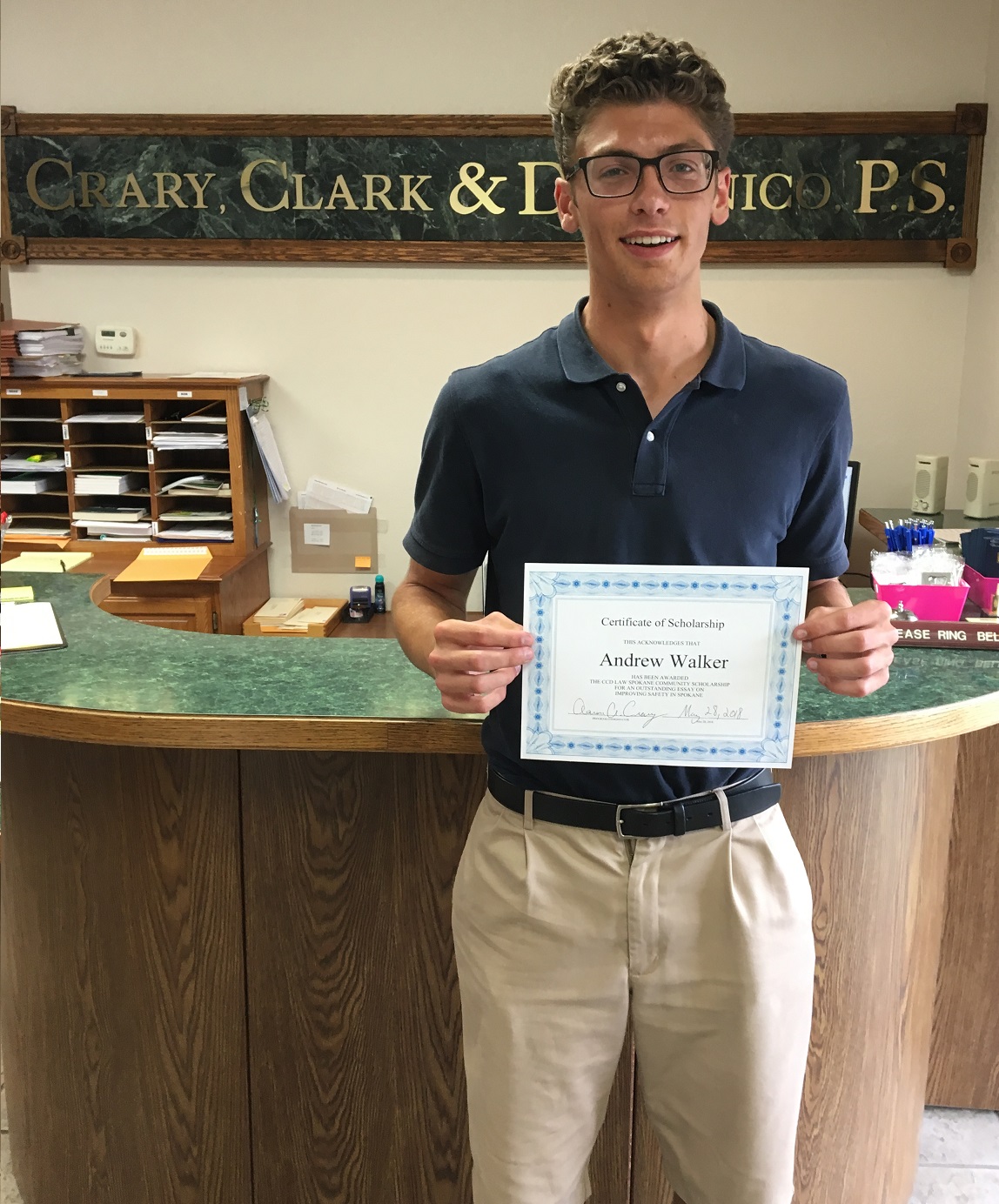 How you would make the streets of Spokane safer?

As someone who bikes to work, I would love more dedicated bike lanes. As a Spokane driver, I would like fewer potholes. As a student, I want beginning drivers to know physics. One of my favorite classes this year has been physics. We learned about motion, friction, buoyancy, heavenly motion, and thermal energy. Momentum was the topic that taught me the most. I was shocked by what I learned. I had no idea the amount of force I controlled when I drove to school.

To make Spokane’s roads safer, I want the drivers ed curriculum to include physics. A short section on momentum would help young adults comprehend the force they control every time they get behind the wheel. If they knew the thousands of Newtons they could send drifting into on coming traffic, they would think twice before checking a text. If they knew fractions of seconds drastically reduces impulse, they wouldn’t speed. If they knew the momentum of a moving body, they would wear their seatbelts. Sadly, many young drivers check their texts, speed, and don’t wear seatbelts while driving. Teaching physics could solve all these problems.

How? P=MV. In other words, momentum equals mass times velocity. Let’s say that a 2,200-pound car is traveling at 45 Mph. The equation tells us the car has a momentum 144,621 pounds times feet per second. Let’s plug these same numbers into another equation: FT=MV. The Impulse-Force Theorem states that impulse, a change in momentum, is equal to a mass times change in velocity. If this car hits a tree and the collision lasts for 1.5 seconds, it experiences a force of 96,200 pounds times feet per second squared. That’s equivalent to nearly 3,000 pounds falling a little over 3 feet.

A ton and a half falling 3 feet would scare most beginning drivers, but the weight of the potential danger really hits when you think about a car hitting you. Even at slow speeds, the momentum behind a car is incredibly large and the time of the collision is terrifyingly short. When a car hits a pedestrian, the short time frame drastically multiplies the force. The force of hitting an oncoming car is truly staggering. The force skyrockets when the collision time shortens, not to mention the additional force of the other car in the opposite direction. Newton’s third law of motion states, “For every action there is an equal and opposite reaction.” This seems harmless enough till the “opposite reaction” is colliding with the grill of a 30,000 pound semi-truck going 60 mph. Drivers would be more attentive if they imagined the force of a collision between their body and their seatbelt. The nearly instantaneous collision astronomically increases the force far beyond what the human body was designed to withstand.